The sea-breeding cao is round and flat, with a large torso and a flat and wide head; the mouth is large, the front is slightly tilted, and the level is wide and wide; the kiss is medium-sized, about 1/3 of the head length; the eye is small, without a lipid film , 1/7~1/10 of the head length, wide eye gap, on both sides of the head; front

The frontal bone can not be stretched, the front end of the upper jaw is near the front of the eye, the lower jaw is slightly longer than the upper jaw; the nostrils are oblong, 2 on each side, at the same level as the upper edge of the eye; the upper and lower jaw, humerus and tongue mask are fluffy. The dorsal fin is short and separated, and the anal fin has 2 to 3 weak spines. When the baby is round, the caudal fin is round, and the adult caudal fin is concave in the shape of a half moon. The tail stalk is nearly cylindrical, laterally flat, without ridges. The first dorsal fin 8~10 fins are short and thick, and can be pleated into the ditch. The pectoral fins are pointed and scorpion-shaped, and the ventral fins are chest. They have 1 spine and 5 fins. During the culture process, the shape of the caudal fin has changed. At 130 cm, the caudal fin has a pointed tail shape. At 180 cm, the caudal fin is slightly truncated. When the height is more than 300 cm, the caudal fin gradually changes to a deep fork shape. The upper leaf is slightly longer than the lower leaf. The surface of the fish, the cheeks, the upper edge of the upper edge, the top of the head, and the base of the fin are all small round scales. The front end of the lateral line is wavy, the wave above the pectoral fin is larger, and the posterior segment reaches the base of the caudal fin. 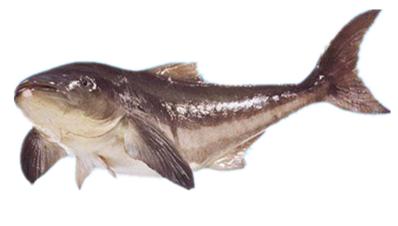 The cobia has a brownish back and a light brown side.

The abdomen is white; the black side band of the same eye extends from the mouth to the caudal fin base, and the side band has a shallow band above and below; the shallow band is a narrower dark band. The black side of the juvenile fish is obvious, but the adult fish is not obvious. The body is elongated, semi-cylindrical; the head is wide and flat. The mouth is large, the end position, the lower jaw is protruding; the jaw, upper jaw and tongue have fluffy teeth. The first dorsal fin has 7-9 (usually 8) individual short, hard spines, embedded in the groove, without membrane connection; with 28-33 soft strips. The second dorsal fin is long, and the dorsal fin of the adult fish is slightly higher. The pectoral fin tip, the older fish becomes hooked. The anal fin is shorter than the dorsal fin; it has 1-3 spines and 23-27 soft strips. The tail fin of the adult fish is crescent-shaped, and the upper circle is longer than the lower circle (the caudal fin of the young fish is round and the middle fin is extended). The scales are small and embedded in thick skin; the front of the lateral line is slightly wavy.

The address of this article:http://www.hiseatonfisheries.net/product/578.html